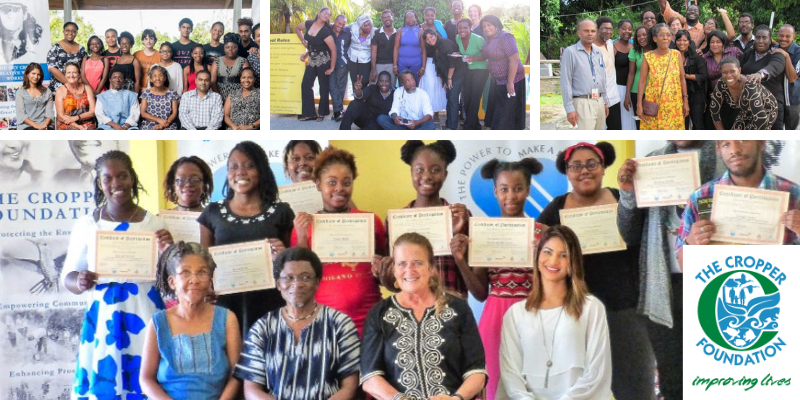 Since 2000, The Cropper Foundation's Residential Writers' Workshop has been sponsored through a mix of Foundation/Cropper Family support and support by corporate Trinidad and Tobago. This has always been the model, to ensure that the costs of attending remain equitable, for any participant within the Caribbean.

However, increasing costs and reduced corporate support have resulted in the Foundation needing to seek additional funding to ensure the success of the 10th Residential Writers' Workshop - adding 15 more names to the cohort of Caribbean writers, as we design and implement a longer-term model of sustainability for the Workshop.

Your support in making the 10th Residential Writers' Workshop a success will go a long way in ensuring that this landmark initiative remains a cornerstone of Caribbean literary excellence.

A literary career is not for the faint of heart. Muses are inconstant, inspiration is unreliable, talent does not provide insurance against failure. Writing requires discipline, technical advice, sound criticism, and a community of teachers and peers to develop their craft.

Since 2000, the Foundation, in partnership with the Creative Arts Centre (now the Department of Creative and Festival Arts of the Faculty of Humanities and Education) of the University of the West Indies, St Augustine,
has hosted nine residential workshops for adults (and four for teens) in some of the most tranquil, beautiful settings across Trinidad and Tobago. The workshop is open to applicants throughout the Caribbean and its diaspora – from the aspiring to the already-published.

Participants are provided with workspace, accommodation and professional guidance. We consider ourselves most fortunate in our choice of partners. From inception, the facilitators have been UWI lecturers Dr Merle
Hodge, Dr Dani Lyndersay and Professor Emeritus Funso Aiyejina. Their continued involvement in the programme attests to the viability of this model of support and has nurtured steady growth and many success stories.

The writers benefit from group work, time for independent writing, lectures and discussions with established Caribbean authors like Rachel Manley and Earl Lovelace. Towards the end of the three weeks, public readings are organized in or around the area in which the workshop was held – a show of appreciation to the community that welcomed the group and, possibly, helped them find their voices.

"The ability to visualize a story or character, then bring it to life through selective words and phrases is a craft in itself. The Cropper Foundation’s writers’ workshop helped me to develop that craft by providing a clear understanding of the skills and techniques required to become a better writer. Since my participation in 2008,
my stories have appeared or are forthcoming in The Caribbean Writer, St. Somewhere journal, Tongues of the Ocean and Poui. I was also awarded The Caribbean Writer’s David Hough Literary Prize in 2009. The Cropper Foundation offers the only real opportunity for writers in Trinidad and Tobago. Writers are forced to seek exposure and recognition through regional or international publications, which is a long and exhausting road for
those who continue to persevere. I have always noted the efforts of the Foundation and owe a debt of gratitude for the support and encouragement given to Caribbean writers, who would otherwise abandon their dreams of achieving greatness because no one believed in their potential."
Vashti Bowlah (2008)

"More than “a writing programme”, I saw it as a life experience - meeting new people, forging new connections and learning more about myself and others through that. The self/other realisation and
expansion that occur as a result of life’s various experiences = what was brought to me/my writing.
Listening to others and realising how different we all are - creatively and otherwise - is also what this kind of residency highlights. Creative residencies are not plentiful in the Caribbean, so anyopportunity for artists/writers to be immersed in intimate creative communing can only be positive.
So far, I believe everyone who was on the Balandra residency has gone ahead to do some form of
noteworthy creative writing. Some have published, some have entered and won competitions, some continue to write regularly and share their work with the rest of us. The Balandra group has remained in touch since our residency in 2008."
Elspeth Duncan (2008)

"About a year before I was accepted to the inaugural Cropper Foundation workshop in 2000, I started something called ‘The Janus Young Writers’ Guild’ in Guyana. I was passionate, zealous about the struggle young writers faced in getting their work published or even noticed. One day while at Grande Riviere, John Cropper asked me to talk a walk with him. I responded, “Sure, Mr. Cropper” to which he retorted, “Who is this ‘Mr. Cropper’ person? Call me John.” He then took me through the meandering pathways of a very Socratic conversation, the core thrust of which was that in my zeal to represent young writers, I was ignoring and marginalising (the very crimes I was campaigning against) writers who were no longer young but who might have had, by virtue of the very same factors that I was seeking to deconstruct, their emergence stymied. Today I work in cultural policy with one of my primary aims being transforming the environment for all creative people not just in Guyana but across the region, in keeping with the Cropper vision. That one incident, two decades ago, with John is what set me on that path."
Ruel Johnson (2000)

No results have been found